Isabella has everything to live for; a nice job that she enjoys and a boyfriend in the Army who has promised to marry and take care of her. But when she goes to investigate the sounds of a crying child one night after work, it is against her better judgement and against everything that she had ever been taught. And for good reason.

Kidnapped and trafficked by a ruthless gang, she is bound and kept naked alongside three other women, waiting her turn to be sold like a piece of merchandise to a wealthy Mexican cartel owner.

She knows that any attempt to escape will likely result in her death and as she tries to make sense of her situation and make a connection with one of her kidnappers, to try to let him see the human being behind the commodity, she is suddenly confronted by the shocking reality of her situation and how he came to be in it.

Now, with only her own salvation at the forefront of her mind, Isabella is prepared to do whatever it takes to be free once more and to exact the revenge that is burning fiercely inside her. 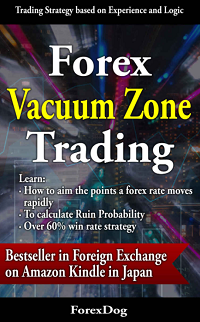 【Trading Strategy to “not lose” based on Experience and Logic】

This book is a detailed explanation of “Vacuum Zone Trading” which I introduced in a featured article “The List of Thoughts by Millionaires – What is the Method which the Porsche-Investor Recommends that ‘Your Funds will Definitely Increase?’” from “SPA! February 16, 2019” (FUSOSHA Publishing Inc. Released on February 19, 2019). I also added articles of my e-mail newsletter to it.

I was contacted by an investment writer who I’ve known for a long time and asked if I had any ideas for a feature in “SPA!”. I told him about my “ForexDog’s Vacuum Zone Trading”, and he agreed to feature it.

By understanding the contents explained in this book correctly, you can become a trader who can win (or not lose). So, I hope you will read it to the end.

Why do many traders lose money?

Many people who invest in forex focus only on making profits, but “not losing” is more important than making profits.
And There are many forex traders who don’t know “why they lose money”. Such as ” win rate,” “winning streak,” or “monthly profit” are not matter.
In this book, I will show you the method which reveals why people lose in Forex by using numbers.

By using these 12 moving averages, you can clearly see where the rates move rapidly and stop. I call the place which a rate moves rapidly “vacuum zone,” and that can be a timing to trade.

ForexDog’s Vacuum Zone Trading is a simple, yet very powerful trading method. Therefore, even beginners can utilize this method easily. The win rate can be over 60%, and the author myself boasts a win rate of almost 70%.

“ForexDog’s Vacuum Zone Trading” is a so-called market follower method. While it is generally believed that the win rate of the market follower method is lower than that of the contrarian method, the win rate of over 60% is astounding.
I hope you will learn the very simple yet powerful “ForexDog’s Vacuum Zone Trading” in this book. “Your Marketing Content Planner: 8 Steps To Supercharge Your Content Plan and Build a Social Media Strategy That Sells” by Izabela Cottle

Your content planner is the key in creating blog posts or social media content that sells your products or services. Content should work for you not the other way around. Each piece of content should link to your product or services to draw customers to your online shop. If you struggle to plan or organise your content strategy then Your Marketing Content Planner Guide will help you plan your content strategy and build content that will hook your customers.

What will you find inside Your Marketing Content Planner?
Learn to stop focusing on scheduling posts and create content ideas that sell your products and services
Find out how to use SMART goals to fire up your content planning Ideas to identify your brand voice and generate content that fits your brand and business.
Follow 8 easy steps to build an effective content strategy for social media that will drive traffic and increase sales.

Learn to avoid common mistakes that small business owners and solopreneurs make when creating content. Stop chasing trends and get tips on blog post writing that engage your customers.

“Illithesium: The Awakening” by Adam Zomparelli

For fans of Hyperion, Game of Thrones that want to discover something new …

Our current reality on planet Earth is plagued by social problems, such as piracy, the sex trade and Death, which seems to constantly undo God’s creations. Are there any powers in the universe which can set humanity onto a more positive path, by cleansing corruption from civilization?

Fuelled by Illithesium—trillions upon trillions of micro-organisms fused into every one of his cells—the humanoid being called Oron has God-like powers. His role is to nurture the futures of civilizations on many planets, by ridding them of undesirable influences under God’s cosmic hierarchy. Yet on Earth, Oron meets a human who teaches him what he has never known: how to act based on emotions rather than pure logic and duty. His protégé, Aurelia, is a young woman whom Oron coaches to become powerful in myriad ways, and yet she has the power to change how he acts, based upon love. This informs Oron’s decision to challenge the legendary and archaic being Death itself to save humanity. Oron cannot hope to survive this encounter, but Aurelia fuses with his power, and together—leaving Earth to recover from the epic struggle as they continue with their missions. Aurelia does not yet know it, but she will be facing Faelot, spawn of Lucifer, in her future role as the cleanser of planets.

Ryanne and I have been friends since 5th grade. Two peas in a pod. When you saw one, you saw the other. We consider each other sisters. I am free-spirited and business minded. Love takes a back seat when it comes to my life. I don’t have time for it, at least that’s what I thought. Ryanne, on the other hand, is a helpless romantic. She believes in love and all the mushiness that accompanies it. We differ in that way. Love has been good to Ryanne and as I get older, am softening up to it. However, the one person that I am willing to take a chance on, has moved on with another female. With friends that I consider family, I attempt to get over him so that I may find love…crazy love. This is my story.

When her dreams are plagued with visions of horrific battles, Sarai must return to her kingdom, Zunoro, after a ten-year absence. Crossing the border Sarai meets the stern and proud Ayize, whom she convinces to join her army. It is a decision she might come to regret, for Sarai soon discovers she is under the influence of an ancient Inmakwe curse. Self-preservation and the fate of her people collide.

ONE REAPER MUST GO TO GREAT LENGTHS TO SAVE HIS NEXT VICTIM.

Darius, a human who once lived as a slave until his untimely death is given a second chance at life when he becomes a Reaper in the afterlife.

Over 200 years later Darius discovers another Reaper is consuming the souls of innocent humans in order to gain power. In an effort to thwart this rogue and restore balance to life and death, Darius takes it upon himself to protect the next victim, Peyton Paradisa.

“The Depression and Anxiety Workbook: 5 Ways to Raise the Spirit and Experience Joy” by Leibny Hope

Transform your life on day one!

5 brilliant methods to IMPROVE your MOOD and FEEL BETTER!

Yes, you can change your life by changing your thoughts in 5 days!