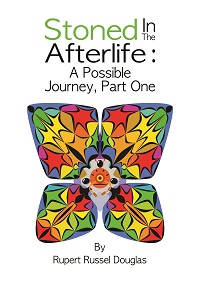 “Stoned In The Afterlife: A Possible Journey, Part One” by Rupert Russel Douglas

Joe doesn’t believe he’s dead. He wakes up after a car accident and is met by two dope smoking beings. As nothing seems to fit with his expectations of death and the afterlife, he believes he’s dreaming. He’s unable to influence or change the fantasy, so he plays along.

His litmus test is to find his wife, who’s been dead for twenty years. If he found her he would know if he was dead or in a coma.

A light hearted journey for a scientist who was never quite sure about what he believed. Is Joe’s mind creating the fantasy just to comfort him, and maybe tell him something important, or is he actually dead, and every afterlife account he ever heard was complete fiction?

This book is the first in a series of gentle, dark comedies. The first book is an introduction, introducing some characters, and concepts. The rest of the ‘A Possible Journey’ story takes Joe through experiences that challenge his beliefs, and the answer to the question ‘Am I dead?’