The Ridiculousness of Magic

Jaja and the Gray Watchers 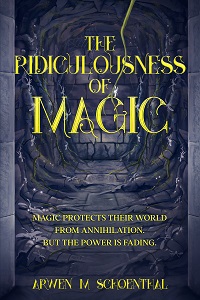 “The Ridiculousness of Magic” by Arwen Schoenthal

Ripped from her ordinary life and thrown head-first into a violent alien world, Aryn Williams is a normal woman thrust into a reality more exciting than she ever could have wished for. While the magic that protects the kingdom of Lilystone withers, the walls that protect their empire threaten to crumble, but as a human, she’s immune to the curse of the infamous Unnamed Sorceress. Aryn must confront the elusive witches who lurk in the monster-infested wild beyond the safety of their kingdom–and she must stop the Unnamed Sorceress before her only chance of returning home is lost forever….

But at least she’ll have help—Duke Elrick, General of the Lilystone guard, and Iliam, the last of his kind. But the more time she spends with Duke Elrick, the more she questions where she really belongs.